Having shared the stage and collaborated with countless African greats including Baaba Maal, Mamadou Jimi Mbaye and Mbaye Dieye Faye in the Madison Band (formerly of Youssou Ndour), Thione Seck, Nicolas Menheim and Papa Seck in the band Africando, the Grand Soda Mama, and many others, Mamadou introduced his signature rhythm guitar sound around the world.

Mamadou Diop has had opportunities to connect with influential giants including James Brown, the Jackson Five with Michael Jackson, Nelson Mandela – all personal inspirations for his art.

Now, fronting his own award-winning band, he resides in the USA composing and performing new and amazing songs about peace, love, hope, family and friendship, bringing a positive vibe to our world.

Today, Mamadou Diop is one of the most respected rhythm guitarists from his country and an accomplished sabar (Senegalese hand and stick) and djembe drummer. He holds weekly African drum classes in Newburyport Sundays 6-7pm at the Dance Place .

In addition to being a musician, Mamadou Diop is a valued pillar of his communities. He is President and a founding member of A3D, Inc. (African Development through Drum and Dance), a local non-profit organization that supports people in need locally in the Boston area and overseas in West Africa. Through his efforts, Mamadou has been recognized by the Art of Living Foundation and by the Commonwealth of Massachusetts. His band supports his efforts, with several band members being part of A3D. Learn more about this noble group of people determined to make a positive difference in the world around them.

Red Tail Hawk’s music is a vibrant fusion of alternative, groove rock and pop. They capture audiences with soaring melodies, heady grooves and high-energy performances that have earned them distinction on Boston’s north shore. Frontman Ben Zanfagna is a fluent vocalist & sax player whose songwriting and arrangements are inspired by raw experience, blues, jazz and soul but are never bounded by conventional norms.

RTH has opened for National acts such as G-Love, Ruby Rose Fox, The Brew and Chris Duarte, to name a few. They’ve played major music festival in the region, performed at The Museum of Fine Arts, Boston and sold-out shows at The Stone Church in Newmarket, NH and The Press Room in Portsmouth, NH.

Following the release of Red Tail Hawk’s self-titled EP (2011) and their late-2014 release, “Magnetic Malaise” their late-2015 single releases, “Zoo” and “Blot” the band released a full-length album, “Night Soup” on the 10th of June, 2016. RTH is currently touring around New England, and writing new music for the next album release.

Thanks to all who made Gabriel’s Rainbow Coffeehouse Halloween Costume Ball a Great Night!

The SpaceHeaters are an eclectic group of musicians who have been friends even longer than they have been bandmates. Known for their diverse and far ranging musical interests, the Heaters blend Rock, R&B, Soul, Funk and Folk Rock sensibilities to create a musical tapestry that is highly listenable and decidedly danceable.

Also appearing: New Orleans style pianist and guitarist Malcolm Carnwath aka Dr. Feelgood, first inspired by hanging out at Lockers a music shop in Philidelphia, where all the reigning folk stars of the day played, from Mississippi John Hurt sonny terry and Brownie McGhee, Dave Van Ronk. He moved to Newburyport in 76 where he headed up the Blues band Little Malcolm and the Mal FUNK Shuns for 30 years. 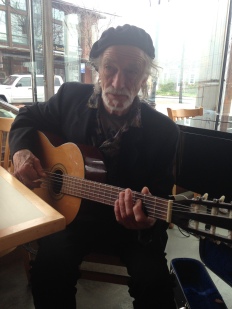 British born singer-songwriter-guitarist Lucian Parkin, aka Lucky Leroux, cut his chops as a busker, playing on the streets and clubs of Canada coast to coast. His style ranges from folk to blues to jazz and his lyrics are chock full of social and political wit and witticism. As the co-founder and artistic director of Imagine Studios he has supported and fostered the musical community spirit in the greater Newburyport area for decades.

Bassist/Guitarist Chuck Walker is the front man for the Chuck Walker Jazz trio and Cuppa Joe, a roots, blues and rock n’ roll quartet. He is also a music educator and community music organizer.

Lynne Taylor is a singer-songwriter-pianist/bassist who has performed her wide variety of rootsy, rockin’, righteous music throughout New England for decades. With thoughtful lyrics that explore personal, political and social themes, she is a one of a kind original entertainer not to be missed!

We hope to see you there!